In Gods and Kings Dana Thomas, author of Deluxe, tells the story of how John Galliano and Alexander McQueen changed the face of fashion

In the first decade of the 21st century the fashion world was dominated by two very different but equally successful and turbulent figures. But, within twelve months, Alexander McQueen had committed suicide, and John Galliano had professionally imploded. Who was to blame? And how was fashion changed by their rise and fall? Spanning the 80s, 90s and noughties, Gods and Kings tells the story of these two charismatic figures and times of great change in the world of fashion, from London's raucous art and club scene to the old-world glamour of Parisian couture, and reveals the machinations of this notoriously secretive industry.

[Praise for Dana Thomas's Deluxe]:
'A crisp, witty social history that's as entertaining as it is informative' - New York Times

Dana Thomas began her career writing for the Style section of The Washington Post and served as Newsweek's European culture and fashion correspondent for fifteen years. She has written for The New York Times Magazine, The New Yorker, WSJ, the Financial Times, Vogue, Harper's Bazaar, and was the European editor of Condé Nast Portfolio. She is a contributing editor for T: The New York Times Style Magazine, and is the author of the New York Times bestseller, Deluxe: How Luxury Lost Its Lustre. She lives in Paris. 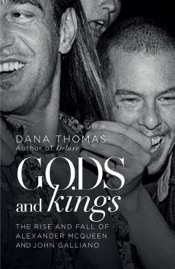